Lohri 2020: Why and How Lohri Festival is Celebrated 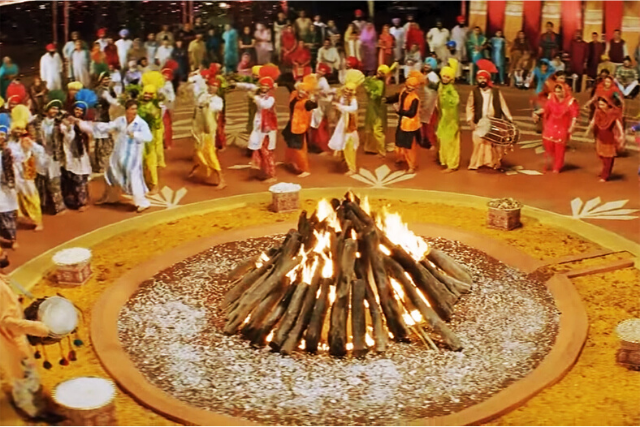 Lohri is a popular Punjabi folk festival celebrated mainly on 13 January every year by Sikhs and Hindus mainly in Punjab and North part of India. This day falls on the last night of Pausa month and on the eve of Makar Sankranti. It is also seen as a sign of winter and the arrival of spring. The Lohri festival is associated with weaving and harvesting of the Rabi crop. On this day, farmers dedicate rabi crops like maize, sesame, wheat, mustard, gram, etc. to the fire and show their gratitude to God. In this post I am going to describe How Lohri is Celebrates and why?

On the evening of Lohri, people sing folk songs with love and brotherhood and revolve around an open space by burning fire with sticks and dupes. Dance, bhangra and gidda are also seen along with drums. Sitting around the fire is enjoyed with Revdi, Gajak and Peanuts,And they distributed to all people in the form of offerings. Lohri is celebrated with pomp on the special place in the house where a new marriage or child is born.

May you like to Know: Heavy Bridal Suits – Get Perfect Wedding Look with Beautiful Designs

Generally, festivals are celebrated along with the changes in nature, as it is said in Lohri that this day is the longest night of the year, from which the day starts gradually increasing. Also, this time is considered as a time of joy for the farmers. Grains start swaying in the fields,and they look like pleasant weather, which is celebrated together with family and friends. In this way, the aim of this festival is to increase mutual unity.

How is the festival of Lohri celebrated

The special festivals of Punjabi’s are Lohri which they celebrate with pomp,Dance, song and drum are the pride of Punjabi’s and without them their festivals are incomplete.

Many days before the arrival of Lohri, young and children sing songs of Lohri. Fifteen days ago, these songs are started singing, which are gone from house to house. In these songs, brave martyrs are remembered, in which the names of Dulla Bhatti are specially taken.

Rabi crops are cut in Lohri and come to homes and are celebrated. The life of the farmers depends on the production of these crops and when the crops of any season come to the houses, festivities are celebrated with great enthusiasm. Sugarcane crop is sown in Lohri especially these days and old crops are harvested. These days, Muli crop also comes and mustard also comes in the fields. It is considered a festival of cold farewells.

There are special dishes of every festival in India. Gajak, Revdi, groundnut etc. are eaten in Lohri and their dishes are also made. In this, mustard greens and maize bread are specially made and fed to the loved ones by trench and love.

On this day, sisters and daughters departed from home with great love are called home and they are respected. According to the Puranic legend, it is celebrated as a penance for Daksha’s mistake and sister daughters are welcomed and apologized for the mistake. On this day, the newly married couple are also greeted with the first Lohri and the gifts of the first Lohri are also given on the birth of the child.

Many types of wood are collected from days before Lohri. Those who are gathered in a good place in the middle of the city, where all can gather, and on the night of Lohri, together with all the people, sit around this bonfire. Many sing songs, play games, forget each other, and embrace each other and congratulate Lohri. Putting fire on this pile of wood, revolve around it and ask for blessings for yourself and your loved ones. Married people go around with their partner. Revadi, sugarcane, gajak, etc. are consumed by sitting around the bonfire.

Farmers these days bring their crops home with great enthusiasm and celebrate. Lohri is celebrated as the farmers new year in Punjab province. This festival is celebrated more by Punjabi and Haryanvi people and they also celebrate this day as New Year.

Even today Lohri’s dhoom remains the same, just today the celebration has taken the form of a party. And instead of hugging, people greet each other through mobile and internet. Congratulations are also sent to WhatsApp and Mail.

The festival of Lohri is celebrated with full enthusiasm like this. People of the country are also settled abroad, in which Punjabi’s mostly live abroad, so Lohri is also celebrated abroad. Especially in Canada, the color of Lohri is very sensitive.

May You like to know: Tips to look Classy and Elegant

Whatever the purpose of the festival, its purpose has always been to bring joy and love to the people. Hope that the festival of Lohri should also fill your life with happiness.